Last week, Cardi B began to worry about coronavirus and took to Instagram to zealously announce that “shit is getting real.” As Cardi B videos tend to, her response went viral immediately. Within days, an enterprising producer and DJ named iMarkkeyzhad ripped the audio, and turned into the centerpiece of a new dance track, fittingly titled “Coronavirus.” The song was officially released to DSPs on Friday, March 13th; by Tuesday it was #9 on the overall iTunes U.S. songs chart.

User-generated videos set to the song quickly began to pop up on TikTok and across social media, catching the attention of Cardi, who tweeted that she wanted royalties when she spotted a video of the song playing in a Rio De Janeiro club.

“The fact that this damn coronavirus song is charting on iTunes… Hold on… let me hit the DJ up and Atlantic so I can get my damn coins,” Cardi B wrote in an Instagram post that was published on Monday. At that time, her screenshot of the iTunes chart showed iMarkkeyz’s “Coronavirus” at #96 on the iTunes chart. In less than a day, it has skyrocketed on the platform. 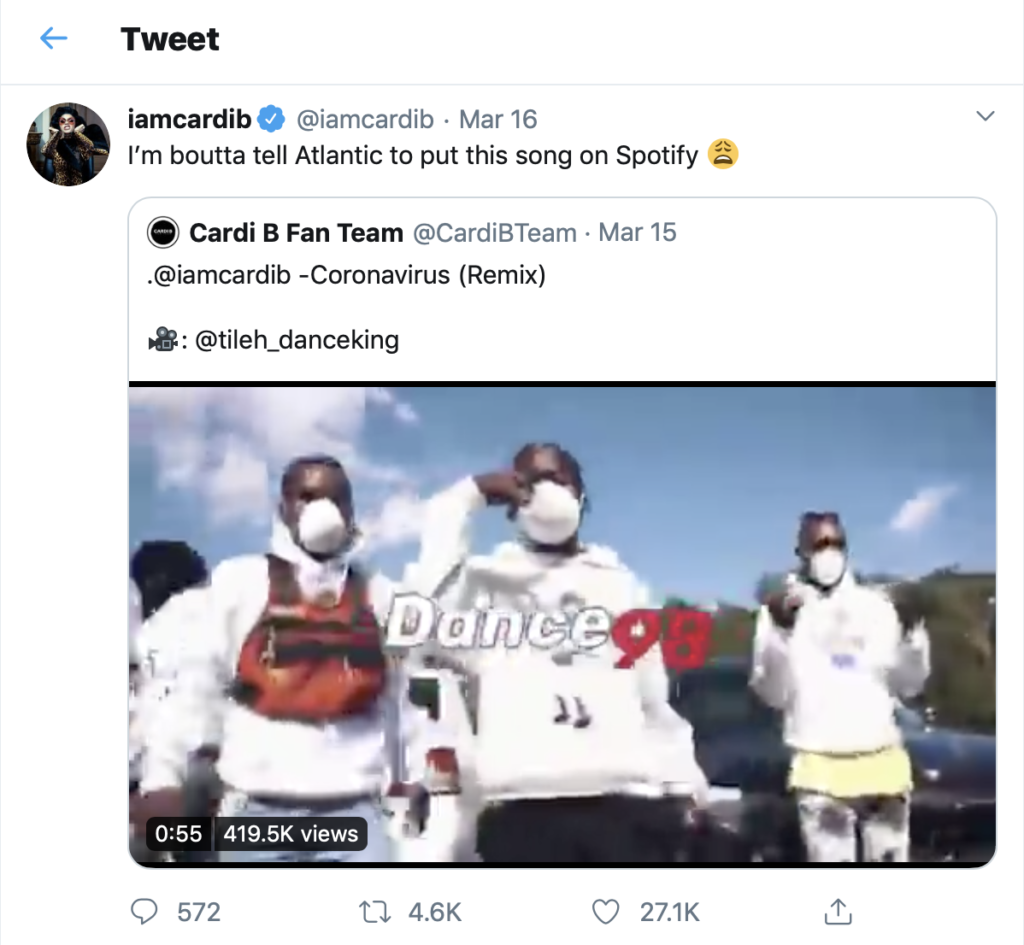 The popularity of “Coronavirus” comes with questions of its legality. Songs that recontextualize source material are more common than ever, and the path to attention (and commercial success) is often much faster than copyright laws can keep up with. When Lil Nas X released “Old Town Road,” he had unwittingly sampled a Nine Inch Nails song — he bought the song’s beat from a producer on the internet — and the song was gathering listeners before the song’s royalty structure was worked out (or he was even signed). In that instance, Nine Inch Nails collaborators Trent Reznor and Atticus Ross were able to walk away with producer credits and 50% of the publishing (or songwriting) rights. It’s possible a similar outcome is possible for Cardi.

According to one music attorney, “Coronavirus” likely represents a copyright violation. Copyright in any sound recording belongs to the maker of the recording — even if that recording is of a person speaking on Instagram. However, the attorney points out, it is common for a record label to put a clause in a contract with an artist that claims “all recordings by the artist” as the label’s property, which would include everything from voice notes to recordings of phone calls — and recordings of Cardi’s Instagram Stories. Which could mean that iMarkkeyz will find himself negotiating directly with Atlantic Records over the fate of his viral song. When Rolling Stone reached out, an Atlantic representative said that the label was “looking into it,” but wouldn’t go into any detail. iMarkkeyz did not respond to a request for comment.

“If the beat does not have any samples except for Cardi’s voice, an approval should be secured from Atlantic (WMG) and from Cardi herself on the master side, and [the publisher] may consider this a publishing use,” adds Deborah Mannis-Gardner, who specializes in music clearances for film, television, samples, and new technology. This would not be a worst case scenario for iMarkkeyz. “I could see her label treating this as a remix and claim 100% ownership of the master, and then pay the producer a royalty.”