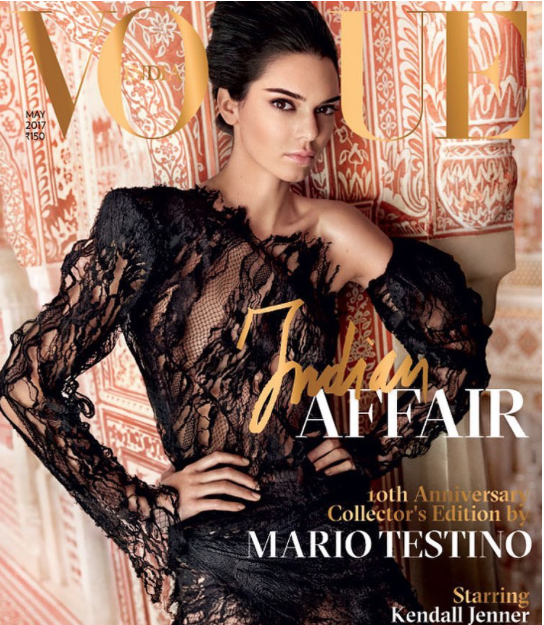 Vogue India’s 10-year anniversary edition featuring Kendall Jenner has sparked a backlash over its failure to put an Indian model on the cover.

The Indian version of the fashion magazine showcased their new cover to mark their tenth year in print on Instagram on Wednesday. Jenner, the supermodel half-sister of Kim, Khloe and Kourtney Kardashian, appears on the front in an editorial shot by esteemed photographer Mario Testino.

However, the reaction to the collaboration was not wholly positive as readers and commenters flocked to condemn the magazine for failing to put an Indian model or Bollywood actress on the front, giving way instead to a white woman.

“Why is she on the cover? You could have many beautiful women you could have hand picked from India?” wrote one commenter. “This saddens me. It’s not to be cruel to Kendall. However, I would have loved to see a beautiful Indian lady, tradition and culture and representing the true essence with grace and respect,” wrote another.

People criticised the magazine for reinforcing a negative connotation to young girls of colour and not using the opportunity of a special issue to showcase the talent in their own country.

In the issue, Jenner modelled alongside Bollywood actor Sushant Singh Rajput and the pair were shot in Jaipur, India by Peruvian photographer Testino. Within the issue, various Indian models and actresses were featured but the fact that Jenner was on the cover, potentially instead of them, sparked a backlash.

The outrage follows a particularly difficult month for Jenner after she was the star of a highly-ridiculed and controversial advert for Pepsi. The drinks giant ended up pulling the advert after it generated a huge amount of criticism for using protest for profit. In particular, the advert was roundly lambasted for being tone-deaf and using a white, privileged woman to act as a protester who hands a police officer a can of Pepsi as a peace offering, conjuring up comparisons against the clashes between white police officers and Black Lives Matter campaigners.

Representatives for Vogue India and Jenner did not immediately respond to a request for comment.