The 2017 MTV Movie & TV Awards delivered quite a show, filled with teary acceptance speeches, high-energy performances and moving tributes — but there was a whole lot going on inside the Shrine Theater that the cameras didn’t catch.

From heartwarming family moments to secret kisses, here’s what you didn’t see on TV:

Jane the Virgin star Brett Dier brought his A-game to the event, sporting an amazing Pac-Man suit on the red carpet.

Zendaya, who impersonated Bruno Mars on this week’s episode of Lip Sync Battle, brought the boogie before the show even started, dancing in her seat to Mars’ hit «24K Magic» alongside Tom Holland and the cast of Spider-Man: Homecoming.

Emma Watson delivered a moving speech as she accepted the night’s first gender neutral award for Best Actor in a Movie for her role as Belle in Beauty and the Beast. Though the real Beast, Dan Stevens, was MIA for the event, host Adam DeVine (wearing a full Beast costume) kindly stepped in — and stood up — applauding Watson with golf claps while standing on tables in the audience.

Baywatch co-stars Alexandra Daddario and Zac Efron kept it casual while presenting the award for Best Actor in a Show. When the lights went down, however, Efron sweetly grabbed Daddario’s hand and kissed it — in a move that had an eyewitness believing the two might be an item. 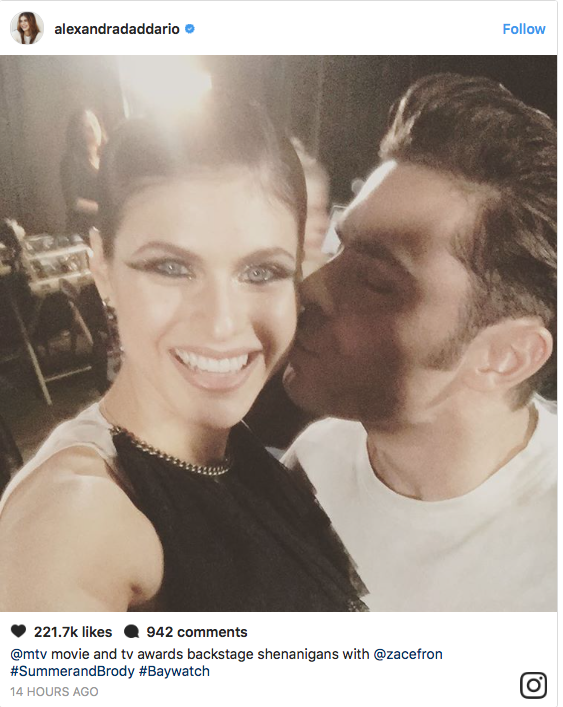