Adele said she was «embarrassed» by her divorce, in an exclusive and wide-ranging interview with Oprah Winfrey. 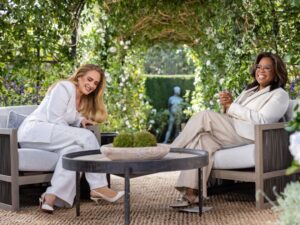 The star said she felt like she had «disrespected» the idea of marriage when she separated from her husband, Simon Konecki, in 2018.

She added that «terrifying anxiety attacks» after the divorce prompted her to adopt an exercise regime that led to her losing 100lb in two years.

The US prime-time special marked her first TV interview about her new album.

It also saw the star perform a selection of new songs and classic hits at the scenic Griffith Observatory in Los Angeles, in the shadow of the Hollywood sign.

Attended by stars like Lizzo, James Corden and Melissa McCarthy, the twilight concert was the first time Adele’s young son, Angelo, had seen her perform live.

«It’s the absolute honour of my life, baby, to have you here tonight,» she said.

During the show, the star even helped a local man propose to his girlfriend, Ashley – serenading the couple with Make You Feel My Love after the stunned bride-to-be said «yes» and burst into tears

Adele was embarrassed by her divorce

«I’ve been obsessed with a nuclear family my whole life because I never came from one,» said the singer, whose father left home when she was just two years old.

«From a very young age [I] promised myself that, when I had kids, we’d stay together. And I tried for a really, really long time.»

Now 33, Adele said she first realised her marriage was crumbling when she took a personality test in a glossy magazine.

One of the questions asked, «what’s something that no-one would ever know about you?», and she blurted out to her friends: «I’m really not happy. I’m not living, I’m just plodding along.»

Although Adele was together with Konecki for eight years, she has previously said the marriage and separation both took place in 2018.

«I take marriage very seriously… and it seems like I don’t now,» she said, remorsefully. «Almost like I disrespected it by getting married and then divorced so quickly. I’m embarrassed because it was so quick.»

Lindsay Lohan, who has largely foregone acting in recent years, will soon star in a yet-to-be-titled Netflix holiday rom-com. The streamer has made a robust business out of Christmas fare, and its original movies such as “Jingle Jangle,” “A Christmas Prince,” “The Christmas Chronicles” and “The Princess Switch” (inspired by Lohan’s “The Parent Trap”) have become instant (and repeatable) holiday classics.

In this new movie, Lohan will play a “newly engaged, spoiled hotel heiress” (according to the logline), who gets amnesia after a skiing accident and “finds herself in the care of a handsome, blue-collar lodge owner and his precocious daughter in the days leading up to Christmas.” The rest of the cast has not yet been announced.

Lohan skyrocketed to fame as an 11-year-old actor, starring in a 1998 reboot of “The Parent Trap.” She followed that with a remake of “Freaky Friday” and “Mean Girls”; both roles cemented her status as an A-list star. After years of being hounded by paparazzi and the tabloids because of personal issues — ones that made her uninsurable for a time because of her chronic absences  — Lohan withdrew from acting by degrees, starting in the early 2010s. She eventually moved abroad, living in both Europe and Dubai.

She’s launched projects sporadically since, such as being the only good thing in Paul Schrader’s 2013 movie, “The Canyons”; appearing in a West End production of “Speed-the-Plow” in 2014; recurring on the British TV comedy “Sick Note” in 2018; starring in the MTV reality show “Lindsay Lohan’s Beach Club” in 2019; and later that year, appearing as a judge on the Australian version of “The Masked Singer.”

On CNN’s New Year’s Eve special in 2019, before the COVID-19 pandemic would press pause on the world, Lohan told hosts Anderson Cooper and Andy Cohen that she wanted to “come back to America and start filming again,” and “taking back the life that I worked so hard for, and sharing it with my family and you guys.”

The Netflix movie starts production in November, so it won’t be for 2021 holiday viewing — audiences will receive this Yuletide present at a time to be announced later.

Janeen Damian (Hallmark Channel’s “A Christmas Waltz”) will direct, and it was written by Damian, Michael Damian, Jeff Bonnett and Ron Oliver. Its producers are MPCA’s Brad Krevoy and Riviera Films’ Michael Damian. MPCA is behind such Netflix Christmas movies as the “A Christmas Prince” franchise, “Operation Christmas Drop” and the forthcoming “A Castle for Christmas.” (And fun fact: Michael Damian was a longtime star of the CBS soap opera “The Young and the Restless,” and in 1989, had a No. 1 single: “Rock On,” from the “Dream a Little Dream” soundtrack.”)

Lohan is represented by APA.