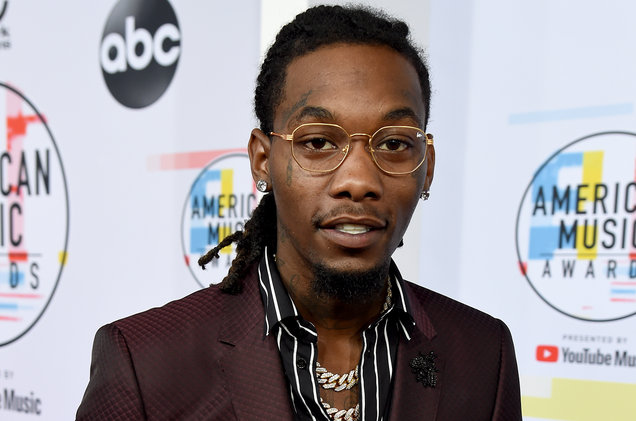 The Migos rapper’s mom outed his dancer days in an interview.

Long before Offset was — well, Offset (his given name is actually Kiari Kendrell Cephus) — he was a backup dancer for Whitney Houston and TLC. It’s true. The New York Times broke te news of the 26-year-old Migos rapper’s secret past in a profile shared Thursday (Nov. 29).

If it feels like we’re currently wading in a pop culture time warp, it’s because we are. In 2018, reboots, remakes, reunions, returns and reimaginings are big business in Hollywood. Major Oscar front-runner A Star is Born, which has grossed over $350 million worldwide, is a remake of a remake of a remake of a remake. The resurrection of Roseannetwenty-one years following its original finale was one of the highest-rated network television events of the year. Up next: maybe Back to the Future, a new Pirates of the Caribbean franchise and, uh, a Northern Exposure revival?

Not everything can be a hit, however. Forbes recently declared Harry Potter spinoff sequel Fantastic Beasts: The Crimes of Grindelwald a «domestic disaster,» dropping an alarming 52% in its second weekend — which also happened to be during family-friendly Thanksgiving break. Reviews, overall, have been even harsher, critics decrying its messy logic and online fans aghast at the film’s troubling political insinuations.

But just because an extraneous thread of a familiar story doesn’t appeal to audiences doesn’t mean the brand itself is a wash. Amazon and Netflix have recently made big pushes into the post-Game of Thrones fantasy sphere, developing new episodic adaptations of Lord of the Rings, Wheel of Time and The Chronicles of Narnia. But instead of looking to mid-century fare, networks should notice what’s right in front of them. With the value of the Harry Potter franchise stronger than ever, and as core HP enthusiasts age into their 30s and introduce their own children to the fandom, there’s no better time than now to give these fans the storytelling they deserve. Here are five reasons it would make creative and financial sense to greenlight an animated Harry Potter television series.

Author J.K. Rowling first published Harry Potter and the Philosopher’s Stone (the British title for Sorcerer’s Stone) in 1997. Many of her original fans, the kids who grew up reading the books and aged along with Harry as he progressed through Hogwarts, are now well into adulthood and are sharing their beloved childhood stories with their own kids. These second-generation fans are keeping the fandom alive and are the perfect long-term investment for the property: Giving them a television series they, too can grow up with, like their parents did with the books, cements a fan for life.

Harry Potter is a $25 billion machine. Far from waning in popularity since the release of the last book and final films, the Potter brand has found new life through gaming, theater, theme parks, spinoffs and more. Mobile RPG Harry Potter: Hogwarts Mystery, a player-led prequel to Harry’s story, has grossed $55 million in revenue within three months of launching this past spring. Game developer Niantic, hot off its augmented reality smash hit Pokémon Go, is expected to release Harry Potter: Wizards Unite within the next year, a similar game that provides «real-life» access to magic through a smartphone.

The Wizarding World of Harry Potter, the three Universal Studios-based theme parks in Orlando, Hollywood and Osaka, remains a popular attraction for kids and adults alike, while the Potter-themed Warner Bros. Studio Tour London is now a main tourism spot in the United Kingdom. Harry Potter is also a West End and Broadway blockbuster: The two-part Tony-and-Olivier winning stage show Harry Potter and the Cursed Child — featuring Harry as a flawed father — became the top-grossing play in Broadway history this year. (The published manuscript alone has sold almost 5 million copies in the U.S.)  And that’s not to mention the hundreds of millions of dollars the Fantastic Beast spinoffs have raked in for Warner Bros. since 2016. Everything from Harry Potter crafting to the annual adult fan convention Leaky Con has continued to foment love for the brand. Heck, to this day Harry Potter is still the largest category on Fanfiction.net. Just last year, twenty years after her first book debuted, J.K. Rowling earned $95 million through her newest revenue streams.

Argue what you will about content saturation and franchise fatigue, Harry Potter is big business and a television event series is likely to reignite the core fan base and is almost certainly guaranteed to lure thousands of new subscribers to the distributing platform (probably HBO for this WarnerMedia property).

A return to the roots

Let’s be honest: for hardcore HP fans, the movies have never been that satisfying. Sure, they’re serviceable, but the films have always been more flash than substance, unable to pack the incredible detail and complex plotting of Rowling’s work into two-plus hours per film. Professional critics have often called them muddled at best, and with the amount of cutting and pasting producers have had to do to map these epic tales into feature-lengths, it’s a surprise any non-reader could have understood the storylines at all. A TV series — let’s say one season per book — would actually provide the time and space to properly adapt this world, particularly as the page numbers steadily rose with each iteration.

It’s true overexposure leads to diminishing returns (Solo: A Star Wars Story, anyone?), but a Harry Potter television series wouldn’t be a flat rehashing of the adaptations as much as it would be a welcome return to the source material. We don’t need endless spinoffs; we need to go back to the roots. If you spent any time on Harry Potter message boards in the early 2000s, you would know how the film’s imperfections drove book enthusiasts bonkers and turned many of HP snobs off forever from the movie franchise. That doesn’t mean, however, that we don’t want this story adapted at all. We just want it told right. Childhood nostalgia moves mountains: Over this past holiday weekend, the teaser trailer for the photorealistic CGI Lion King remake accumulated roughly 225 million views within 24 hours of its release. Potterheads just want our bread and circuses like anyone else!

If you want a Harry Potter TV series to stand on its own, animate it. Not only would this silence the reboot cynics, it would also breathe new creative life into the story. (And certainly cut astronomical production and CGI costs.) In my opinion, fan art has always been able to capture the feeling of the books much more adeptly than the live action films, and there’s a very specific reason for this. Re-read the books and you’ll notice a cartoonish quality to the storytelling: I don’t mean that they’re cheesy or poorly written, but that Rowling crafted a world that could only be properly adapted through a fluid and logic-defying medium. The imagery and aural landscape she invokes are already attuned to the cadence of animation, and the very tenets of the medium — from morphing to squash-and-stretch — align perfectly with the exaggerations of her writing style. In other words, there’s magic to animating magic. (For example, in Harry Potter and the Order of the Phoenix, Rowling describes «two large broom-shaped holes» that appear when two enchanted broomsticks smashed though a door to rejoin their masters. That’s not an image or tone that naturally lends itself to live-action.)

This hypothetical series shouldn’t rely on plastic-looking 3D animation, but warm and lush hand-drawn artwork, perhaps with design input from Studio Ghibli’s Hayao Miyazaki, the world’s leading animator of childhood literary classics. Another great benefit of animation is that it eliminates most problems with casting and fan nitpicking. (As much as I adore Alan Rickman, Snape was 32-years-old when Harry entered Hogwarts.)

Redeeming the sins of the creator

Like George Lucas before her, J.K. Rowling has had a post-magnum-opus career that has seen her heroic status fall due to relentless story-diluting spinoffs and innumerable foot-in-mouth moments. For example, from a fan’s perspective, not only does showcasing middle-aged Harry & friends in the Cursed Child feel like unnecessary retconning, but poorly-placed Holocaust references in Fantastic Beasts have alienated viewers. Rowling has also said that she regrets marrying main couple Ron and Hermione, a a stake in the heart of R/H shippers of yore. And thanks to her brazen Tweeting and post-canon revelations, she’s revealed herself to be somewhat tone-deaf to issues of race and gender, leaving Gen Z dismayed. Returning to the original stories and adapting them with heart and a Disney-like attention to artwork will help restore unhappy fans’ faith in the series and help continue its ride into the 21st century.

This article was originally writing by: Hollywood Reporter

A nine-time Emmy nominee for the show, he was diagnosed with ALS in March 2017.

Stephen Hillenburg, the creator of the Nickelodeon animated megahit SpongeBob SquarePants, died Monday. He was 57.

Hillenburg, a former marine biology teacher, died of complications from amyotrophic lateral sclerosis at his home in Southern California. He was diagnosed with the neurodegenerative disease in March 2017.Nickelodeon announced his death in a tweet Tuesday: «We are sad to share the news of the passing of Stephen Hillenburg, the creator of SpongeBob SquarePants. Today, we are observing a moment of silence to honor his life and work.»Hillenburg was a nine-time Emmy nominee for SpongeBob but never a winner.

In February at the Annie Awards in Los Angeles, Hillenburg was among those given a Winsor McCay honor for his career contributions to animation. Tom Kenny, the voice of SpongeBob, made the stage presentation and accepted the award on Hillenburg’s behalf as he remained seated to receive a standing ovation.

Born Aug. 21, 1961, in Lawton, Okla., Hillenburg graduated from Northern California’s Humboldt State University in 1984 with a bachelor’s degree in natural resource planning and interpretation, with an emphasis on marine resources.

«Obviously, SpongeBob is a comedy, but it really was inspired by me liking marine science,» he saidin a 2015 interview. «I focused on that, and I never thought the two would come together.»

While working as a marine biology teacher at the Orange County Marine Institute (now the Ocean Institute) in Dana Point, California, Hillenburg noticed that «animation started booming,» and that led him to enroll at the California Institute of the Arts in Valencia as a graduate student in 1987. He left five years later with a degree in experimental animation.

Starting in 1993, Hillenburg wrote and directed for Rocko’s Modern Life and Rugrats at Nickelodeon.

Martin Olson, a writer on Rocko’s Modern Life, admired a comic book that Hillenburg had drawn and written about tide pools. «It got me thinking, ‘If I were to do a show, it would be about these invertebrates and these crazy animals that exist in the ocean,’ » Hillenburg recalled. «It was that moment that said, ‘Maybe I should pursue this.’ »

SpongeBob SquarePants premiered in May 1999. The series — which has won multiple awards, including honors from the British Emmys, the Annies and ASCAP — has aired more than 250 episodes during its nearly two decades on air.

Hillenburg also was an early voice actor for Potty the Parrot and played the ukulele for some of the show’s original music.SpongeBob has been adapted twice for the big screen, for 2004’s The SpongeBob SquarePants Movieand again for 2015’s The SpongeBob Movie: Sponge Out of Water. Additionally, the character found life on the stage in the Tony-winning SpongeBob SquarePants: The Broadway Musical, which wrapped a 327-show stint in September. Hillenburg is survived by his wife of 20 years, Karen (the character Karen Plankton is named for her); son Clay; mother Nancy; brother Brian and his wife, Isabel; and nieces Emma and Hazel.

«Steve imbued SpongeBob SquarePants with a unique sense of humor and innocence that has brought joy to generations of kids and families everywhere,» Nickelodeon said. «His utterly original characters and the world of Bikini Bottom will long stand as a reminder of the value of optimism, friendship and the limitless power of imagination.»