Cher Lloyd has given birth to her first daughter. The singer announced via socail media that her and husband Craig Monk brought a baby girl named Delilah Rae into the world on Monday (May 28). “Our baby girl is here!” she gushed in the caption on Instagram. “We are so in love…” 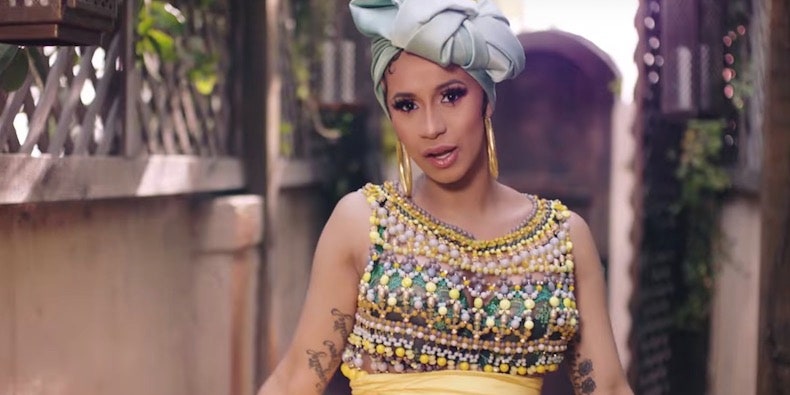 Cardi B, Bad Bunny, and J Balvin have shared the music video for their song “I Like It.” Watch the Eif Rivera-directed video below.

“I Like It” appears on Cardi’s debut album Invasion of Privacy. The clip follows visuals for singles “Bartier Cardi,” “Bodak Yellow,” and “Be Careful.”

Although fans still aren’t done telling her they love her, Demi Lovato has new tunes brewing. The «Sorry Not Sorry» singer revealed on Twitter early Monday (May 29) that the next taste of her to-be-announced seventh studio album could arrive shortly.

In a brief Q&A, a fan asked Lovato if she was finished releasing singles from Tell Me You Love Me. «Pretty much,» Lovato answered. «I have so much new music to release very VERY soon!!!»

«So no third single?» Another fan questioned, presumably wanting more than just «Sorry Not Sorry» and the album’s title track. «Give us a third single and then move on.» To which Lovato replied simply: «Nope.»

Even with her recent smash collaborations with Luis Fonsi, Clean Bandit and Christina Aguilera, Lovato hinted that even more new singles from her are on the horizon.

«Very VERY soon…. could be a matter of weeks actually,» Lovato continued.

So are you officially done promoting singles off “TMYLM”?!

Pretty much… I have so much new music to release very VERY soon!!! https://t.co/EaAaiJ4mjD

Very VERY soon…. could be a matter of weeks actually https://t.co/vOciaHp5mD

The confusion over whether rapper Childish Gambino and actor/comedian Donald Glover are two different people continues, this time baffling Cardi B.

Last week, in a now-deleted tweet, the Invasion of Privacy rapper seemingly made an astute observation before quickly realizing she was incorrect.

If, before today, you were positive that Cardi B understood that Donald Glover and Childish Gambino are the same person, then you might want to take a seat… pic.twitter.com/TsxsqrSwcV

It’s uncertain whether Cardi was making a joke or being serious. Either way, her comments about Gambino and Glover — who are the same person, for the record — inspired some of her social media followers to share their own experiences with the matter.

«The movie hasn’t started yet but there’s no way any part of Solo is going to be better than the guy LOSING HIS MIND outside the theater realizing Childish Gambino and Donald Glover are the same person,» one Twitter user wrote, referencing Glover’s role as Lando Calrissian in the latest Star Wars film, Solo.

South Korean President Moon Jae-in took a few minutes out of his very busy schedule to congratulate K-pop phenomenon BTS on the group’s first No. 1 album on the Billboard 200.

On Monday (May 28), about two days after meeting with North Korean leader Kim Jong Un at a surprise summit to discuss peace, President Moon shared his excitement about BTS’ exciting accomplishment.

Congratulations to the Seven Music-loving Boys and Their Wings, ‘ARMY’!
The songs, dance, dreams and enthusiasm of BTS energized and gave strength to young people around the world. https://t.co/6ZL4XdrZVv

«Congratulations to the Seven Music-loving Boys and Their Wings, ‘ARMY’!» Moon wrote in a statement. «The songs, dance, dreams and enthusiasm of BTS energized and gave strength to young people around the world.»

BTS recently debuted at No. 1 on the Billboard 200 albums chart with its latest effort, Love Yourself: Tear. It’s the first No. 1 for the seven-member group, and the first K-pop album to lead the tally.

«Congratulations to the Seven Music-loving Boys and Their Wings, ‘ARMY’!
The songs, dance, dreams and enthusiasm of BTS 방탄소년단 energized and gave strength to young people around the world. I congratulate BTS on topping the Billboard 200 with their album titled ‘Love Yourself 轉 Tear’. This is the first ever Korean album to claim the top spot, and also the first non-English album to do so in 12 years.
At the very heart of BTS’s outstanding dancing and singing is sincerity. This magical power turns grief into hope and differences into similarity. Each of the seven members sings in a way that is true to himself and the life he wants to live. Their melody and lyrics transcend regional borders, language, culture, and institutions.
Bangtan, which literally means bulletproof in Korean, was born out of the will to protect teenagers from prejudice and oppression. The names of each member—Jin, Suga, J-Hope, RM, Jimin, V and Jungkook—are going to be remembered for a long time. Thank you to BTS for spreading joy across Korea and the world with your great performances.»

The boy band extends its span on the chart to a record 22 years & six months.

Backstreet Boys are back on Billboard‘s Pop Songs airplay chart, as «Don’t Go Breaking My Heart» debuts at No. 32 on the list dated June 2.

The band earns its first entry on the ranking since 2007, when «Inconsolable» reached No. 34 that October.

The Pop Songs chart, which began in 1992 (and in 2017 celebrated its 25th anniversary), measures total weekly plays, as tabulated by Nielsen Music, among its reporting panel of 158 mainstream top 40 stations.

The new single follows BSB’s last album, In a World Like This, which debuted and peaked at No. 5 on the Billboard 200, marking the group’s ninth top 10 (encompassing its entire output). The act has sold 31.3 million albums to date in the U.S., the 24th-best total among all artists since Nielsen Music began tracking sales in 1991.

All charts will update on Billboard.com Wednesday (May 30).

s its span of appearing on Pop Songs to a record 22 years and six months, narrowly passing Madonna’s stretch of 22 years and four months, from 1992 to 2015.

The Chainsmokers have the dance-pop market sufficiently cornered, but the duo tried its hand at a more R&B-tinged sound with its recent single «Somebody,» featuring Drew Love from THEY. It’s a turn that works. Fans have listened to «Somebody» more than 36 million times on Spotify. Now, it’s time to give the tune a kick in the pants with a remix package.

Fans get six remixes in total. It starts with an upbeat take from Riggi & Piros. A quick build leads to fast tempos and serious club vibes. The Bay area’s T-Massbrings a big boost of bass for his take, while Australian producer Naderi gives it a wobbly, interstellar groove. The duo’s fellow Angeleno Fluencee brings «Somebody» a futuristic shimmer, Sydney’s Sippy puts a hefty half-time beat to work, and Ruhde rounds it out with a sunset groove.

«Somebody» currently sits at No. 8 on the Hot Dance/Electronic Songs chart. Give the song some new legs with one of these remixes below.

Well, Shawn Mendes has — gasp! — grown up a bit, and he’s no longer the squeaky clean 16-year-old who serenaded his way into listeners’ hearts with the G-rated heartbreak bop, «Stitches,» back in 2015. Over three years later, Mendes’ self-titled third studio album, out Friday (May 25), takes a major step up in maturity both sonically and with the inclusion of some slightly suggestive lyrics.

Don’t worry about Mendes tarnishing his sugary sweet image, though. Gentlemanly as always, he still keeps it classy on LP3, which also includes his most vulnerable and politically-driven tunes to date.

However, at 19, we think it’s only natural for some of his content to get a little sexually implicit when the time is right, employing multiple allusions to risque nights. Here are seven instances of eyebrow-raising lyrics to be heard on Shawn Mendes.

«Where Were You In the Morning?»

«Fallin’ All in You»

«Sunrise with you on my chest
No blinds in the place where I live
Daybreak open your eyes
Cause this was only ever meant to be for one night, still»

«But oohh she’s so specific when she’s at my place
At my place she’s got particular taste
Yeah, she’s so obsessed with the chase
Yeah, she don’t waste time on conversations
No, she just goes right for the face yeah»

«Where Were You In the Morning?»

«Fallin’ All in You»

«Fast forward a couple years, yea
Grown up in the place that we live
Make love then we fight
Laugh cause it was only meant to be for one night, baby»

As Nicki Minaj’s “Chun-Li” scoots 11-8 on the Mainstream R&B/Hip-Hop airplay chart dated May 26, the rapper secures her 30th top 10 entry on the list and ties Beyoncé for the most visits to the tier by a female artist in the chart’s history.

“Chun-Li” rises with a 10 percent gain in plays in the week ending May 20, according to Nielsen Music.

Among all acts, Minaj and Beyoncé now share the seventh-best top 10 total on the Mainstream R&B/Hip-Hop chart. Drake tops all acts with 58.

Minaj first entered the region in 2010 via a featured role on Ludacris’ “My Chick Bad,” which reached No. 2 that May. Of her 30 top 10 successes, nine have climbed all the way to No. 1. That’s the third-best mark among women: Only Beyoncé (12) and Rihanna (10) claim more leaders.

Game Of Thrones star Emilia Clarke has teased what her final filmed scenes as Daenerys Targaryen on Game Of Thrones will be like and her feelings about leaving the character.

As Game Of Thrones approaches its final season, Clarke spoke to Vanity Fair revealing that although she has a little more filming to do, she has shot her “final on-screen moments” as Danerys.

Read more: Here’s everything we know so far about Game Of Thrones season 8.

She said of the experience: “It fucked me up. Knowing that is going to be a lasting flavour in someone’s mouth of what Daenerys is…”

Clarke did confirm some widely theorised directions for her character as she spoke of “shooting for the first time with several of the show’s top stars, including Sophie Turner (Sansa Stark) and Maisie Williams (Arya Stark)”

As well as mysteriously teasing Daenerys “doing all this weird shit – you’ll know what I mean when you see it.” 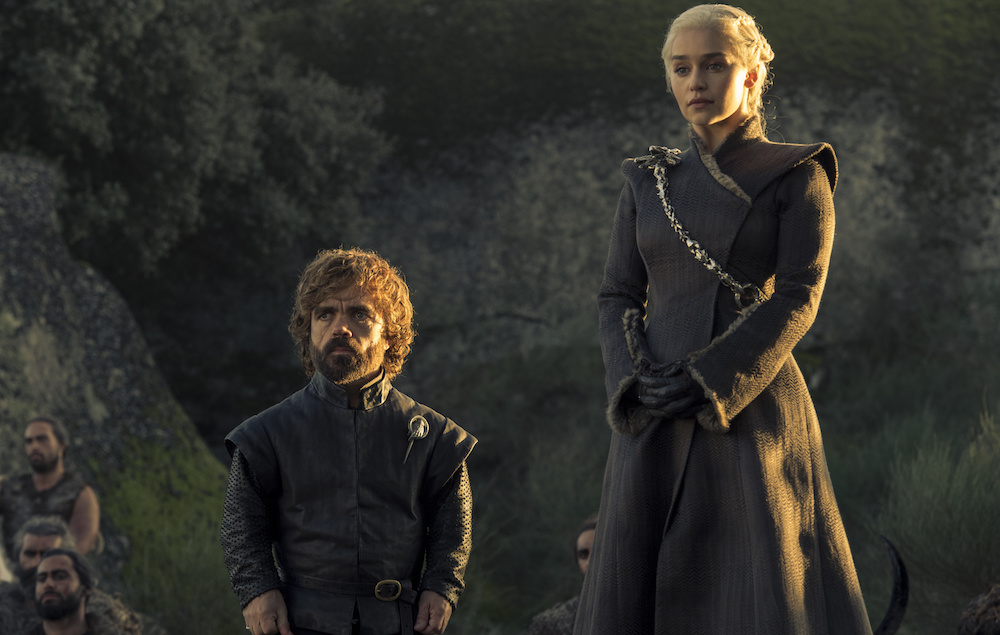 Game Of Thrones will conclude with its eighth season, due to air in 2019.

Star Maisie Williams recently said filming will end at the end of 2018. “We wrap in December and we air our first episode in April [2019],” she said.

Meanwhile, a new study has used an algorithm to attempt to predict who will die (as well as those most likely to survive and conquer) in the final season of Game Of Thrones.

Emilia Clarke can be seen playing a role in Solo: A Star Wars Story which is out today (May 25).